Here is a pic from '97. It was during the Tomorrowland refit and we see some stuff in storage for that. In the middle is the sculpture that used to grace the entrance to Space Mountain lying on its side. It is now the sculpture that is closest to the Star Trader. If you look at it close enough, on your next visit to Tomorrowland, you can see where it was cut (so it could be laid down) and welded back together. To the right in the pic is the Mouserail. It is waiting for it's dismantling to go into the que for Rocket Rods. This pic is about where the entrance to the parking garage is now. 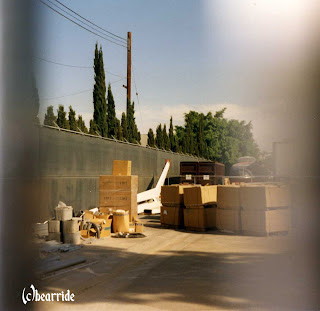 Hey all,
Here is a bumper sticker from the 1970-80's for the Main Street Electrical Parade. What I find weird is that it's the Disneyland Electrical Parade. Who knows what they were thinking. I am gonna try a different technique to capture this sticker in all its glory. But for now this will do. 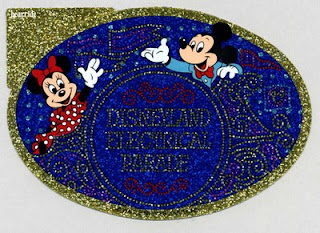 Here today we have four great things here in Tomorrowland; Space Mountain, The Rocket Jets (right where they should be), The PeopleMover and the Tomorrowland Terrace. But look, isn't that a 59 Ford Skyliner? It must be Blast To The Past!!! 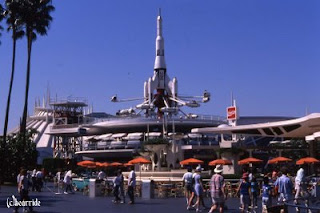 A Picture's Mate And A Rant

A few months ago I posted a pix of the Disney Showcase on Main Street during the time it was painted brown and yellow. I couldn't remember when it was but I now know, 1990. Here is a mate to that pix. It shows the Disney Showcase in all it's baby doo-doo brown (I recently re-read a book (David Koenig) that says painters on Main Street would sometime change a color as the individual thought it looked better, I wonder if this is one of those times). Next door is The Town Square Cafe, although it's time is nearly up. 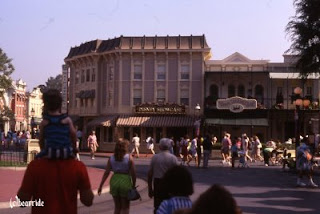 OK, now a rant! In a post here at Videblog in January 2007, I posted a pix of the "Return to OZ" unit in the Main Street Electrical Parade. This pix has shown up on numerous websites and blogs without a mention of who the pix belongs to. Unless otherwise noted all pics on this blog were taken by me. I know that I can't do anything about it now, but it just gets my undies in a bunch that some people take credit for something that they didn't do. If there is any argument to any pics that show up here I have the slide or negative to prove who the are owned by. I know that Disney owns all legal crap on their theme parks blah blah blah, but own up to the fact that the image was taken by someone and include that info.
I'm done now with my rant.
Thank you for listening.


Edit: I was able to get ahold of one website and he didn't know who the owner of the pic was. He was very apologetic and is putting the correct info on it! Yay!!!! I am regaining faith in humanity!
Posted by Bearride - Raymond at 2:47 PM 4 comments: